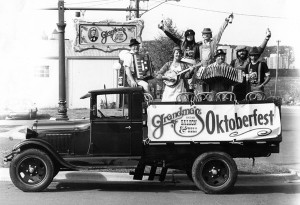 Grandma’s Oktoberfest is so big we should call it Canal Park-toberfest!

Grandma’s world famous Oktoberfest has become more than one restaurant can handle so this year it’s expanded it to include The Sports Garden, too! The 43rd annual festival kicks off Wednesday, September 26th at 11 AM in Grandma’s Saloon and Grill in Canal Park with tapping of the ceremonial first keg. Jason Manning, the popular host of the KQDS morning radio show, will be wielding the mallet and hoisting the first Oktoberfest brew! Then it’s crazy time with authentic German fare, more Oktoberfest beer, and live music with the Oktoberfest All-Stars – featuring “Slovenian’s Got Talent” international musician and yodeler – Gasper Krek. And new this year at Grandma’s Canal Park, on Friday and Saturday, we introduce national recording artist and master of music versatility, fresh from the Minnesota State Fair – Hank Thunander.

Then the Polka Party kicks into high gear with the new bier hall at The Sports Garden. Yep, Friday and Saturday, September 28 and 29 we showcase the contest, dancing, and demonstrations that this Oktoberfest celebration has become famous for. The Garden will feel like a big-top in Munich with German fare and great live polka music with the Oktoberfest All-Stars. All with no cover!

The Oktoberfest All Star Polka Band – featuring internationally acclaimed talent from across the globe are back to form the ultimate polka band; Joe Jagunich from the Joey J Duo Dance Band; Frank Bucar from the Singing Slovenes; and Gasper Krek from Slovenia’s Got Talent equivalent; and its Gasper Krek’s showmanship and incredible yodeling talent gets the entire room on its feet.

Of course the looks, tastes, and smells of Oktoberfest will surround you at Grandma’s and at The Sports Garden. Each restaurant is converted into a German bier hall, complete with banners, streamers, gourds, pumpkins, cornstalks and fresh foliage from local farms. Grandma’s Saloon & Grill will have its traditional restaurant fare with an extensive German menu featuring the likes of “The Wurst” a huge German bratwurst, sweet Sauerbraten dinner, traditional Wienerschnitzel, and Bavarian strudel. And don’t forget the beer! There’s a vast selection of Oktoberfest brews including fall craft beer selections from the Great Lakes region, as well as Paulaner imported from Germany at both locations.

Whether you come for the food, the music, the bier, or the fun, you will quickly realize that when experienced all together – it’s unforgettable! Celebrate our 43rd Oktoberfest during Kick Off Week September 26-30. Then the celebration continues from September October 1-14 with A Taste of Oktoberfest menu available at all Saloon & Grill locations including Miller Hill and Virginia.