From humble small-town race to one of the country's best.

What Else Could You Want in a Marathon?

Here’s a riddle for you. What do you get when you combine $600, a scenic highway, the largest freshwater lake in the world, a handful of long-distance runners, a pub, and a whole lot of passion? The answer: Grandma’s Marathon. Sounds simple, doesn’t it? But from these resources has grown one of the most successful races in the history of marathon running.

Through it all, Grandma’s has remained true to its original purpose – that of being a people’s race and providing a fun, unforgettable weekend for everyone.

It all started during the running boom of the mid-1970s. The North Shore Striders, a Duluth running club consisting of approximately 40 members, set forth to plan a marathon along the club’s favorite training course from Two Harbors, Minnesota, to Duluth, Minnesota. The club had organized races in the past, but not on the scale of a marathon. At that time, there weren’t many races of 26.2 miles or longer – especially in the Midwest – so club members were confident that people would register for their race.

“We didn’t have a lot of vision when we started to plan the first race, but we loved the sport of running. We knew we had a great course, we knew how to host races, and most importantly we knew how to have fun,” says Scott Keenan, executive director of Grandma’s Marathon and former president of the North Shore Striders.

The club wanted this to be more than an ordinary training run along the beautiful shores of Lake Superior. The members wanted it to be a well-organized, high-quality event. There was one major problem, however: money. The budget they had put together was $649 – the bare minimum needed to host the race and still do a good job – and the Striders had only $24 in their bank account. It was quite apparent that they would have to get funding for the event somehow or it wasn’t going to happen at all.

“Back then it was extremely difficult to find sponsorship money because special events, especially road races, weren’t looked upon by the business community as a strong method of advertising and promotion,” explains Keenan.

After being turned down by many businesses in the Duluth area, the Striders had a stroke of luck when they approached Mickey Paulucci and Andy Borg, who were opening a new restaurant in Canal Park called Grandma’s Saloon & Deli. The two entrepreneurs saw the marathon as a unique way to promote their business. Not afraid to take a chance, they agreed to make a major contribution – $600. “We decided that anybody who was willing to give that amount of money deserved to get the title sponsorship,” Keenan says.

With the funding from Grandma’s Saloon & Deli and a few smaller donations from other businesses, the Striders met their fund-raising goals and had a name for the race to boot. The next task was getting the word out about the marathon and getting people to sign up. “We didn’t have much budgeted for advertising. In fact, we had $45 to purchase an ad in the Minnesota Distance Running Association publication, and that was it,” says Keenan. “We worked hard to get as much media coverage as possible, which back then wasn’t an easy thing to do. We also used other means to get publicity such as using area hotel marquees and flyers, and we invited 1976 10,000-meter Olympian Garry Bjorklund to run his debut marathon, which is probably one of the best public relations moves we have ever made.”

Entries along with the $3 entry fee started to roll in, and on June 25, 1977, Grandma’s Marathon was born. Despite unusually hot temperatures that day, 116 people finished (102 men and 14 women), led by Bjorklund who won with a time of 2 hours, 21 minutes, 54 seconds. Having Bjorklund run and then win the inaugural race gave Grandma’s Marathon instant recognition.

The first race was deemed a success, and the North Shore Striders began thinking of the future. “We were really happy with how the first race went, but frankly we didn’t know what would happen in the years to come. We only dreamed of someday being as big as the Paavo Nurmi Marathon in Hurley, Wisconsin, which drew almost a thousand runners,” says Keenan.

My, How We’ve Grown

Keenan and the North Shore Striders were in for a surprise the following year when numbers nearly quadrupled with a total of 677 participants. By 1980 the participant field reached 3,084, and it was clear that Grandma’s Marathon was establishing itself as a top marathon destination. “Our field numbers grew really fast, and I credit that to the same things that continue to make Grandma’s Marathon a success today – a healthy running community, a great course, extremely dedicated volunteers, and the drive from a lot of stakeholders to host a high-quality, memorable race year after year,” Keenan explains.

Much More than A Marathon

While the North Shore Striders may not have had much vision for the race that first year, the members did know that participants would want to eat well the night before and celebrate their accomplishments the night after. “When Grandma’s [Saloon & Deli] signed on as a sponsor, we promised them that they’d make their money back in beer and food sales, says Keenan. The Striders made good on the promise. The evening prior to the inaugural race, runners gathered at Grandma’s Saloon & Deli for the first annual marathon spaghetti dinner and then enjoyed a postrace party.

“Grandma’s has always been more than a marathon. While the central theme of the event is running, we strive to provide a weekend packed with fun and entertainment for everyone involved, whether you’re a runner or race fan,” explains Keenan.

Perhaps Garry Bjorklund said it best when talking to a reporter years ago, “What else could you want in a marathon? Grandma’s Marathon starts in the middle of the woods, runs along the beautiful shores of Lake Superior, and finishes at a pub.” 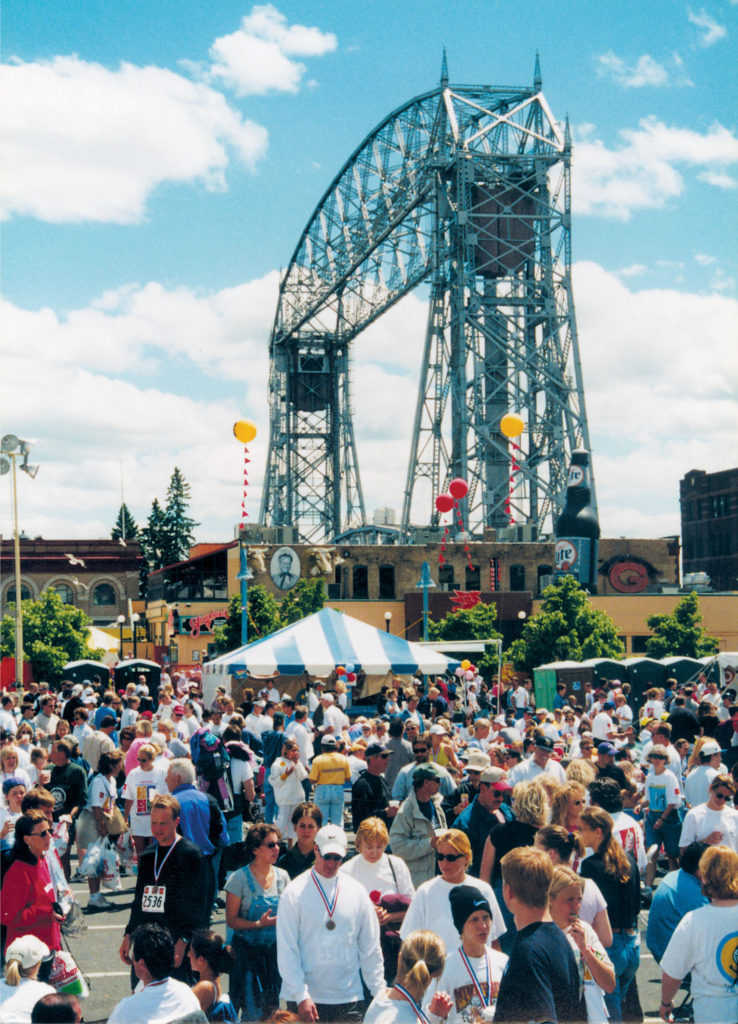